Through our endless correspondence and the thoughts we shared, the exhibition and archive gradually transformed into the multi-layered project Iran & Co. Michel Dewilde and a number of other enthusiastic individuals also participated but, from the outset, we decided not to rush. Instead, we planned to simultaneously follow our multi-dimensional research in different stages and along different paths.
One of the paths is that of the interviews. We began making these at the Dubai Art Fair in March 2010.The related films are, at present, a work in progress. The interviewees were chosen from a large group of curators, collectors, gallery owners, critics and experts and from a broad range of artists, from established and emerging stars, to artists who had been side-lined. We wanted to get to know the creators and contributors within the Iranian contemporary art world and to listen to their unique ideas and thoughts, their future aspirations and the current anxieties caused by the recent market-driven craze for Iranian art.

As part of our ongoing survey, the other task that lies before us is the compilation of a register of the exhibitions of Iranian art held outside of Iran. Often, the exhibitions were orchestrated for European and North American audiences and, of course, the influential Iranians in the diaspora. In the absence or malfunction of state institutions, and with a lack of private investment within the country, some people tried to gain power by founding their own institutions and related communities. There were frequent attempts that ended up disintegrating because of factors such as restrictive regulations, customs policies and the soft censorship mentioned earlier. The archive covers the events of the last decade and, when analyzing the material, it is clear that several factors influenced the creation of these exhibitions, including the downfall of the Eastern bloc, the search for an alternative other to blame for every potential future risk or imaginary foe, the shock of September 11th and the subsequent surge in Neo-Orientalism.

At first, the role of the Iranians in the formation of these exhibitions was neutral. It would not be unfair to call it passive. However, after the regime change in 2005, the power structure inside Iran shifted. These sociopolitical events gave the whole scene a new rhythm and sense of motivation. Why? It’s crucial to know, because it obviously forced artists to think anew. For those who were being spoiled, and to some degree manipulated, by the outstretched hand of the Institute of Visual Arts and the Tehran Museum of Contemporary Arts, it was a shock. It thus marked the beginning of certain sorts of survival strategies. On the other hand, there were people who refused to take risks with their careers and who silently continued their practice, often in the margins, back in their studios or in small galleries.

At the beginning of the 21st century, in the first half of the decade, the so-called cultural approach was the driving force behind the organization of most of the exhibitions that took place outside of Iran. Slowly, as the investment in art increased and the expansion of the Internet grew in Iran, catalogs and websites gained more significance in terms of numbers and quality. A swarm of eager individuals and the board members of various institutions flew towards Iran with high hopes and a kind of fidelity. Dealers, agents, intellectuals and critics followed. Nor must we forget the journalists and reporters who tended to base their writing upon a few days spent in Tehran and other big cities. From this they created a patchwork that included a mixture of Iranian contemporary art, women’s rights issues, underground music and homosexuality. Thus a new set of counter-stereotypes was incorporated within the existing ones and the claim was made that it represented the other.

Iran, the one that you never see or hear about in the news. It’s a new way for someone to make a name for him (or her) self and earn some money.
In the second part of the decade, it is possible to trace the effect of political turmoil and the ups and downs of different economies on both a global and a regional level. In this era, the exhibitions tended to be wrapped in more sophisticated layers of clichés and kitsch. However, despite all the care and the theoretical trappings, the clichés were nearly always exposed.

sketch, a croquis, which just happened to be based upon the records that came to light and what the witnesses described from their own perspective. It was not meant to judge the entire scene or predict the future. Rather, it was a group attempt to gather evidence from the shattered field. We wanted to try and trace the nature of representation by putting the pieces of the puzzle together, side by side, on a flat surface. We acknowledge that it is still too early to apportion blame and yet too soon to close the files. It’s going to be a long investigation that requires the participation of many researchers, and it will take time to analyze all the random discoveries alongside the systematically filled databases. But the result will be something that is almost totally lacking in Iranian art: documentation.

The team invites scholars, thinkers and potential patrons to step in. With their contributions, it will be much easier to create a multimedia website and publication based on the archive of Iran & Co. 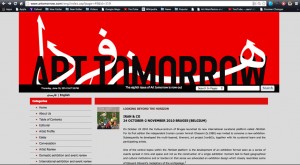 On October 24 2010 the Cultuurcentrum of Bruges launched its new international curatorial platform calledHorizon. For its first edition the independent Iranian curator Amirali Ghasemi (b.1980) was invited to conceive a new exhibition. Subsequently he developed the multi-layered, itinerant, art project Iran&Co, together with his curatorial team and the participating artists.

One of the central topics within the Horizon platform is the development of an exhibition format seen as a series of events spread in time and space and not as the construction of a single exhibition moment tied to fixed geographical and cultural institutions and or borders.In that sense we advocated an exhibition design which closely resembles some of Edouard Glissant’s metaphors of the archipelago.1

Ghasemi created with Iran&Co a wonderful artistic response: a project conceived as a range of events, exhibitions, lectures, historical analysis, which meander as a set of islands, closely knit with one another and at the same time different from each other. A project floating and evolving both in the actual as in the virtual space and this in a time span of several years. In that respect Iran&Co will or can be presented in different countries each time in a different set up. But above all, it is an artistic project which mirrors both on the content as on the presentation level, the complexity of the Iranian condition within the local and the larger international context. In the end, Iran&Co was made up of three distinct parts: an exhibition with creations made by Iranian artists living in Iran and abroad including Nazanin Aharipour, Mojtaba Amini,Golrokh Broumandi, Ali Ettehad,Farid Jafari Samarghandi,Setareh Masoumbeiki, Setareh Jabbari, Behrad Javanbakht, Sona Safaie,Melika Shafahi and Milad Houshmandzadeh; an archive reflecting on ten years of exhibitions about art from Iran; and an comprehensive documentary video installation, bringing together more than hundred new interviews with key players of the Iranian and international art scene.

Iran&Co departed from a recent international phenomenon in the art world: the rise since 2005-2006 of a so-called “Iran Boom”, leading to hundreds of exhibitions and publications dealing with art from Iran and the Middle East, with again an emphasis on Iran.

This “new artistic wave” brings to mind memories of the “sudden apparition” of contemporary art from China, India or Eastern Europe, in the nineties.

The curatorial team of Iran&Co analysed this phenomenon, emphasising the specific Iranian condition, both within Iran and the diaspora, and its different representations in exhibitions and publications produced for a mainly “western context.”

In Bruges the visitor witnessed a first presentation of the Iran&Co project in the huge buildings of the former electric power station (1912) of the Canadian company Bombardier.
The curatorial team stressed the temporary, in-between nature of this presentation and this seems to me a crucial criterion in my review as well. The archive and documentary installation on show for example, covered only a fraction of the existing material. In this way we have to remain conscious of this unfinished aspect of the exhibition, and we are eager to see more. In that respect any review will remain partial at best.

Spread over three levels of the building the art exhibition consisted of a range of site specific works, made by eleven emerging artists, mostly under thirty, from which nine are based in Iran and two are studying outside the country (in France & Canada).

The artists and the curator both break with the expectations about the contemporary artists from Iran and at the same time reintroduce or reinforce them with their daring choice. Iran&Co plays, strives for paradoxes and double bottoms.

The artists worked on a wide range of issues central to the Iran&Co project such as: The question of identity in thematic based exhibitions, the production and representation of forms of “Iranianness”, the status of the artist from a performative perspective, the re-enactment of the position of the “Iranian artist”, themes as the absence and invisibility as part of the Iranian condition beside the humour and playfulness in often metaphorical textual and sculptural forms invisibility as part of the Iranian condition, the question of neo-Orientalism, etc.

On the level of this rich content as on the specific form of presentation the works reflect different intensities and artistic approaches to the concept. Several artists consciously responded to the unfinished, temporary or even incidental nature of the project in their works: for example the second part of the photo Still Life by Nazanin Aharipour, or her tantalizing tent sculpture, text installations by Sona Safaei remained hidden for the visitor or were not even installed. Others, like the impressive installation with the See-saws by Golrokh Broumandi were partly still under construction. In a way Broumandi’s See-saw’s embodied some of the key issues in it’s title and function: the see-saw as a toy, divides subjects and their visions of each other, it pushes them up in the air, but at the same time one is always at the bottom in a dominated position. A similar set of reflections are linked to the installation Your Majecty by Setareh Jabbari. The motive of the circle combined with the standing empty frames and the seemingly endless and untouched rolls of paper canvas connects the worlds of painting, installation and work in progress as a method in a scintillating form.

Like me, the visitor was in some cases left guessing or even at a loss: are their more art works hidden in the building? And why and where are they hidden? Here again Iran&Co played in a subtle way with the expectations of the chiefly western visitor : elements like the invisibility, the absence of the other are still strongly attached to “eastern cultures of the veil”, whilst at the same time frustrating in a humoristic way an art public ever hungry for new artists, from “new” countries. A few artists worked perhaps to closely on a number of existing cultural stereotypes about Iran, but perhaps this is the result of my own “western perspective”?

Iran&Co is a very ambitious curatorial project where a rare sense of historical responsibility as seen in the archive and the documentary video installation is combined with a dazzling number of creations. Above all it touches upon some of the most central issues within the Iranian condition, which will be revealed in coming publications, texts and several future presentations. The exhibition was organized in collaboration with Parkingallery Tehran and will travel to London in November 2011 and Berlin in October 2012.

Representation of Iranian Art Beyond Border

Iran & Co. Digital Archive and Exhibition by Iran & Co Team is licensed under a Creative Commons Attribution-NonCommercial-ShareAlike 4.0 International License.
Based on a work at http://www.iranandco.com/blog.