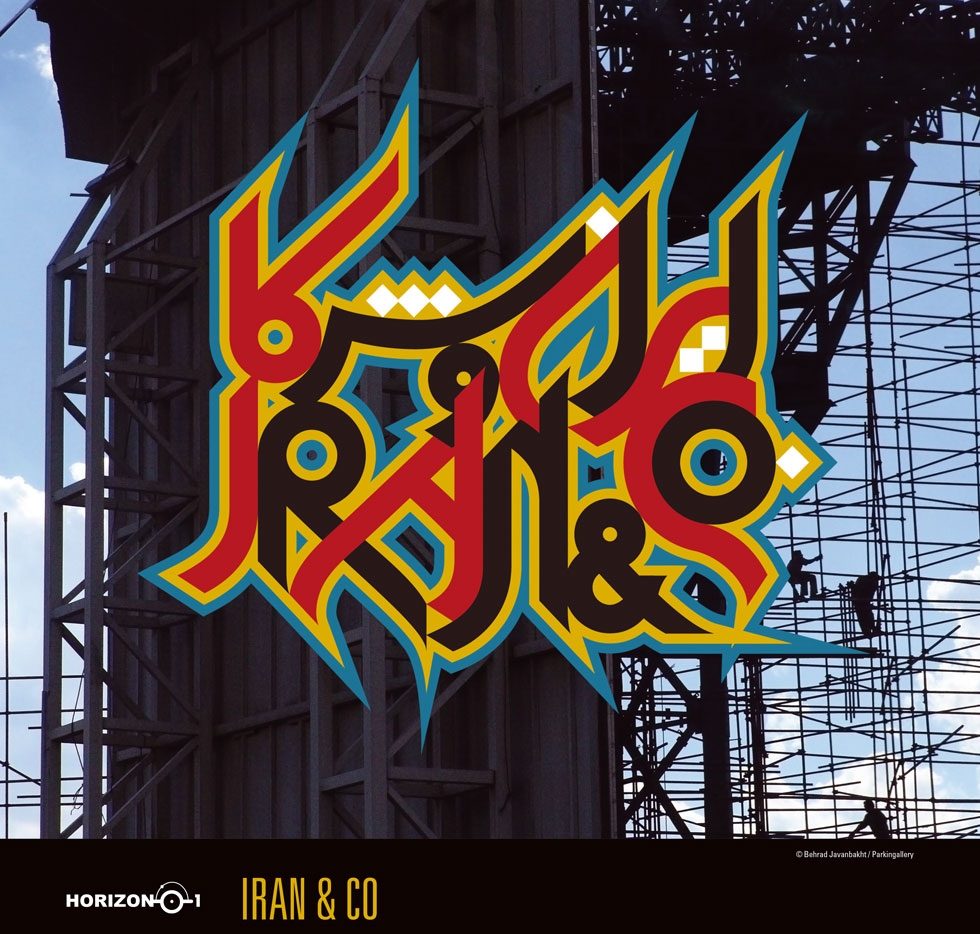 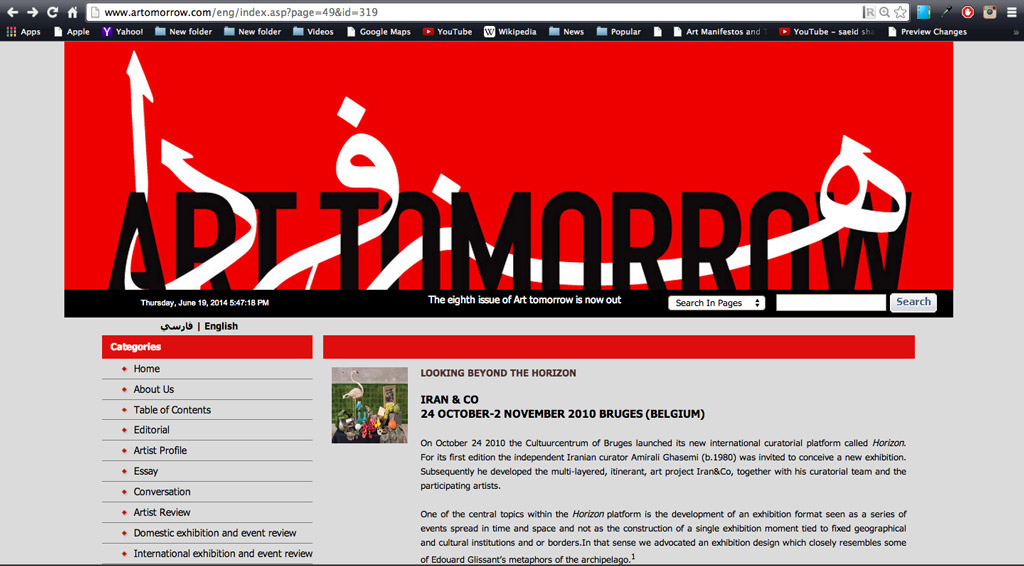 On October 24 2010 the Cultuurcentrum of Bruges launched its new international curatorial platform called horizon. For its first edition, the independent Iranian curator Amirali Ghasemi (b.1980) was invited to conceive a new exhibition. Subsequently, he developed the multi-layered, itinerant, art project Iran&Co, together with his curatorial team and the participating artists.

One of the central topics within the Horizon platform is the development of an exhibition format seen as a series of events spread in time and space and not as the construction of a single exhibition moment tied to fixed geographical and cultural institutions and or borders.In that sense we advocated an exhibition design which closely resembles some of Edouard Glissant’s metaphors of the archipelago.1

Ghasemi created with Iran&Co a wonderful artistic response: a project conceived as a range of events, exhibitions, lectures, historical analysis, which meander as a set of islands, closely knit with one another and at the same time different from each other. A project floating and evolving both in the actual as in the virtual space and this in a time span of several years. In that respect Iran&Co will or can be presented in different countries each time in a different set up. But above all, it is an artistic project which mirrors both on the content as on the presentation level, the complexity of the Iranian condition within the local and the larger international context. In the end, Iran&Co was made up of three distinct parts: an exhibition with creations made by Iranian artists living in Iran and abroad including Nazanin Aharipour, Mojtaba Amini,Golrokh Broumandi, Ali Ettehad,Farid Jafari Samarghandi,Setareh Masoumbeiki, Setareh Jabbari, Behrad Javanbakht, Sona Safaie,Melika Shafahi and Milad Houshmandzadeh; an archive reflecting on ten years of exhibitions about art from Iran; and an comprehensive documentary video installation, bringing together more than hundred new interviews with key players of the Iranian and international art scene.

Iran&Co departed from a recent international phenomenon in the art world: the rise since 2005-2006 of a so-called “Iran Boom”, leading to hundreds of exhibitions and publications dealing with art from Iran and the Middle East, with again an emphasis on Iran.

This “new artistic wave” brings to mind memories of the “sudden apparition” of contemporary art from China, India or Eastern Europe, in the nineties.

The curatorial team of Iran&Co analysed this phenomenon, emphasising the specific Iranian condition, both within Iran and the diaspora, and its different representations in exhibitions and publications produced for a mainly “western context.”

In Bruges, the visitor witnessed a first presentation of the Iran&Co project in the huge buildings of the former electric power station (1912) of the Canadian company Bombardier.
The curatorial team stressed the temporary, in-between nature of this presentation and this seems to me a crucial criterion in my review as well. The archive and documentary installation on show for example, covered only a fraction of the existing material. In this way we have to remain conscious of this unfinished aspect of the exhibition, and we are eager to see more. In that respect any review will remain partial at best.

Spread over three levels of the building the art exhibition consisted of a range of site specific works, made by eleven emerging artists, mostly under thirty, from which nine are based in Iran and two are studying outside the country (in France & Canada).

The artists and the curator both break with the expectations about the contemporary artists from Iran and at the same time reintroduce or reinforce them with their daring choice. Iran&Co plays, strives for paradoxes and double bottoms.

The artists worked on a wide range of issues central to the Iran&Co project such as The question of identity in thematic based exhibitions, the production and representation of forms of “Iranianness”, the status of the artist from a performative perspective, the re-enactment of the position of the “Iranian artist”, themes as the absence and invisibility as part of the Iranian condition besides the humor and playfulness in often metaphorical textual and sculptural forms invisibility as part of the Iranian condition, the question of neo-Orientalism, etc.

On the level of this rich content as on the specific form of presentation, the works reflect different intensities and artistic approaches to the concept. Several artists consciously responded to the unfinished, temporary, or even incidental nature of the project in their works: for example the second part of the photo Still Life by Nazanin Aharipour, or her tantalizing tent sculpture, text installations by Sona Safaei remained hidden for the visitor or were not even installed. Others, like the impressive installation with the See-saws by Golrokh Broumandi, were partly still under construction. In a way Broumandi’s See-saw’s embodied some of the key issues in its title and function: the see-saw as a toy, divides subjects and their visions of each other, it pushes them up in the air, but at the same time one is always at the bottom in a dominated position. A similar set of reflections are linked to the installation Your Majesty by Setareh Jabbari. The motive of the circle combined with the standing empty frames and the seemingly endless and untouched rolls of paper canvas connects the worlds of painting, installation, and work in progress as a method in a scintillating form.

Like me, the visitor was in some cases left guessing or even at a loss: are there more artworks hidden in the building? And why and where are they hidden? Here again, Iran&Co played in a subtle way with the expectations of the chiefly western visitor: elements like the invisibility, the absence of the other are still strongly attached to “eastern cultures of the veil”, whilst at the same time frustrating in a humoristic way an art public ever hungry for new artists, from “new” countries. A few artists worked perhaps too closely on a number of existing cultural stereotypes about Iran, but perhaps this is the result of my own “western perspective”?

Iran&Co is a very ambitious curatorial project where a rare sense of historical responsibility as seen in the archive and the documentary video installation is combined with a dazzling number of creations. Above all, it touches upon some of the most central issues within the Iranian condition, which will be revealed in coming publications, texts, and several future presentations. The exhibition was organized in collaboration with Parkingallery Tehran and will travel to London in November 2011 and Berlin in October 2012.